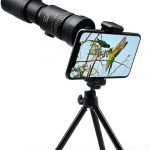 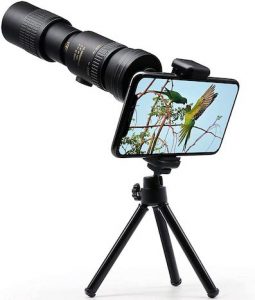 If you or your teen age kid have long dreamed of a telescope, but do not know which one to prefer? Then, this Best Telescope for Teenager Review article is for you.

If you are a beginner, do not immediately go for an expensive telescope model with many features, because it usually designed for experienced astronomers. You will not need most of these functions yet.

We have picked some basic and some advanced models of telescopes, which are easy to understand and manage, so you can easily master of all of their basic functions and develop observation skills.

The 7 Best Telescope For Teenager and Beginner Astronomers

One of the cheapest models on an azimuth mount with a minimum functionality.

According to the stated parameters, the maximum possible increase is x118.

Celestron PowerSeeker 50 AZ is well suited for those who occasionally observe space objects and are not ready for this significant expenses.

It is also appropriate in observations of ground-based objects and atmospheric phenomena.

More young astronomers perceive this model as a maximum as the first stage, giving initial observation skills and allowing to decide on the acquisition of a more serious optical instrument.

Celestron PowerSeeker 50 AZ telescope is good and price wise it is the best telescope for teenager astronomers, and it is in demand due to its very low price.

Celestron AstroMaster 130 EQ is very functional product, which is characterized by excellent quality of both the assembly and the resulting image.

The optics are powerful, all the mechanical elements are reliable, this telescope is very simple to use.

Through it, you can consider the mass of space objects, and the picture will be bright wit good contrast.

The design is modern and interesting. Such a telescope will be most suitable for a person who is seriously interested in astronomy.

With the help of this equipment, you can see many stars in our galaxy, various constellations, like, Sagittarius, Eagle, Scorpio, Cassiopeia and many others.

It is natural, that with a good telescope you will be able to see all the major planets of our solar system, various nebulae and so on.

The viewfinder with a red dot is supplied, In addition, there are two eyepieces, the diameters of which are 10 mm and 20 mm.

The first allows you to get a picture enlarged 33 times and with the second 65 times.

With such eyepieces, you can quickly catch the desired object.

Double and five-fold Barlow lenses provide high power to the telescope, special filters for the moon and stars are also provided.

At maximum settings, you can get an increase of 307 times, in this case, you can see craters, paths, the famous Martian channels and so on.

Levenhuk Skyline 76 X 700 is made on the basis of classical optical scheme i.e. “Newton’s Reflector“.

Such a design is ideal as the first tool for a beginner astronomer who only takes his first steps in this field.

The optical scheme does not distort color, such chromatic aberration is often manifested in inexpensive lens models, it is best seen at the border of fairly bright objects.

With a telescope, everything is supplied which is necessary for comfortable observation.

The telescope mirror has a diameter of 76 mm, it is possible to collect light about 100 times more than with the naked eye.

The quality is good, it is possible to see not only the planets themselves, but also their large satellites.

It well shows objects located far from the solar system, galaxies, nebulae, all kinds of binary stars or clusters of stars.

All mirrors are covered with protective compounds, due to which it is possible to ensure a long period of operation of this equipment.

The telescope tube is made of lightweight aluminium alloy and is located on an alt-azimuth mount with manual control.

The kit includes a tripod, which, if necessary, can be adjusted in height, it has a convenient shelf for various accessories.

The optical finder has a sixfold increase, therefore, you can easily find the desired object. Eyepiece lenses are made of glass, they have multi layer enlightenment. The maximum useful increase is 150 times.

This design is designed specifically for people who have just begun to comprehend the basics of observing celestial bodies.

In the manufacture of the telescope, the latest technology of automatic targeting was used, the control system here is intuitive.

The kit comes with a number of additional components that make the telescope fully ready for use. The tuning process is carried out through a special computer application, and there is no need to know the names of stars.

The telescope itself will point its lens at the object selected in the existing database.

This can significantly save time on reconciliation with the cards of the starry sky.

Such a telescope is equipped with the most modern software, if necessary, it can be updated via the Internet.

The connection unit of the telescope and mount has been modernized, so if necessary, you can quickly change the optical tube.

To make the construction as stable as possible, instead of aluminum tripods, steel tubular tripods are used, which, if necessary, easily absorb even serious vibrations.

Levenhuk Skyline Portable Travel Telescope is considered by many astronomers as professional telescope, it is based on the Maksutov-Cassegrain system of lenses and mirrors.

This refractor telescope has a fairly compact size, the picture is very high quality.

First of all, such a telescope is designed to observe distant space objects, binary stars, clusters, nebulae and galaxies.

The diameter of the lens is 80 mm. The telescope is mounted on a reliable equatorial mount of German production.

The tool is well suited for field trips, especially since it does not weigh too much. The lenses are coated with anti-reflection compounds, so that maximum light passes through them. Mirror surfaces also have a special protective layer, which significantly increases their life.

The equatorial mount is equipped with handles of thin movements, a connector for installing an electric motor is provided.

The mount has special circles of coordinates, due to which you can quickly find the desired object in celestial coordinates.

The tripod is adjustable in height, there is a shelf. Using such a telescope, you can get the highest return, which will be very useful for both observing and for taking photographs of various space objects.

In second place in this section of the ranking of the best telescopes is a universal device with an attractive optical design.

It is easy to install and has a compact size, and the cost is quite reasonable. The diameter of the main mirror is 102 mm.

With such dimensions, it will be possible to discern relatively close objects located mainly within the solar system.

The optics are treated with anti-reflection compounds, it is manufactured using Star Bright XLT technology, which minimizes possible light loss. Included with the telescope is a base that includes over 4,000 cataloged objects. If necessary, it can be updated via the Internet.

The telescope is fully computerized, a motorized fork mount is provided, this allows you to find and monitor space objects in automatic mode.

SkyAlign guidance system, it is enough to point it at three stars, after which it will align the device.

This feature is very convenient for beginners. The telescope operates on the basis of the Maksutov-Kassergren optical scheme, it will not need additional color calibration.

The dimensions of the optical tube are insignificant, it is also characterized by low weight. It is very simple to put up a tripod.

The undisputed leader in its segment of the best telescopes is this design, which has a guidance function.

Another important advantage in terms of equipment operation is a relatively small weight and compact overall dimensions.

This was achieved largely due to the use of the Maksutov-Cassegrain optical scheme.

The diameter of the main mirror is 102 mm, the focal length is significant, this allows you to consider both quite distant objects such as nebulae or star clusters, and close ones, planets, comets, asteroids, satellites, and so on.

The mount is equipped with drives for each axis, due to which it is possible to take photos with short shutter speeds.

Using a standard SLR camera or even a webcam, you can get excellent broadcast from the lunar surface.

The azimuth mount with the automatic guidance function is very simple to control, even a child can figure it out.

The guidance is carried out using a special remote control having the SynScan AZ system.

The database contains over 40,000 space objects. If necessary, the telescope is connected to a laptop or personal computer, for this there is a special cable, control is carried out using a number of programs.

Together with the telescope are two eyepieces with focal lengths of 10 and 25 mm.